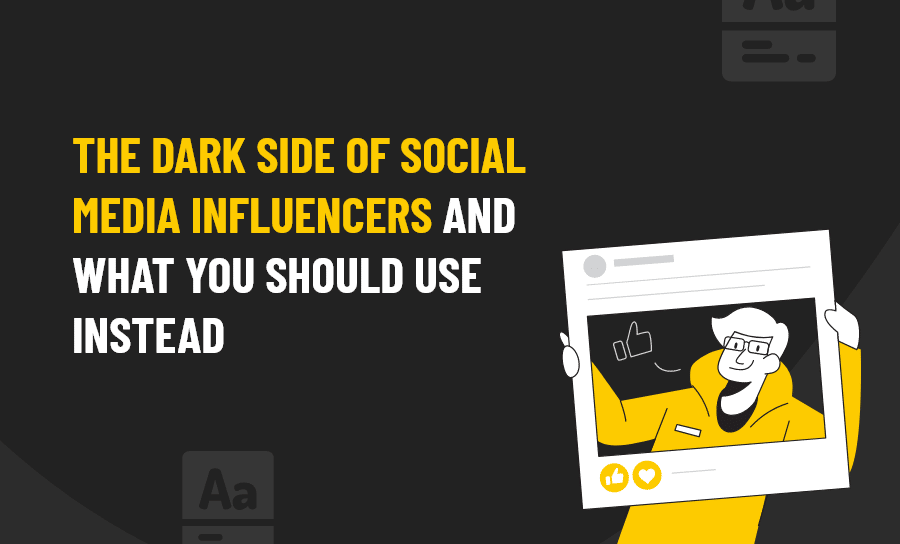 Consumers are increasingly swayed by the opinions of those they admire or consider experts in a certain field. They seek reliable reviews, videos, and blog and social media posts from influential figures as they research companies, people, products, or services.

Social media influencers are gaining traction all the time. A study by Olapic found that 31% of respondents had purchased a product or service just because they had seen an influencer they admired’s social media post about it.

It should be no surprise to learn then that social media influencers are increasingly being sort out to help both market products and services and boost a brand’s PR in general. Having an influencer share how much they love your products/find your service useful/trust your brand, can be very powerful indeed… but beware this means in existence is the the dark side of instagram influencers.

However, like everything good, there is a dark side to making use of social media influencers to boost your brand. At the moment, influencer fraud is one of the biggest problems anyone considering getting into this aspect of PR needs to be aware, and wary, of. How can you protect yourself and your brand? That’s what we are going to take a look at here.

WHO – OR WHAT – ARE FAKE SOCIAL MEDIA INFLUENCERS?

Before you can learn how to spot them, you do need to understand who fake social media influencers are.

Fake influencers are social media users who initially seem like influencers. Most brands can’t afford to work with major celebrities, but that’s fine, micro-influencers can be just as effective to work with. But only if their influence is real.

Some people have chosen to take major shortcuts to become a real influencer, and other times a group of less than scrupulous people create a person who doesn’t even really exist. In both cases, their followings are made up of fake accounts and bots and so they don’t actually have any kind of meaningful sway over many real people at all, making them useless to you.

And this is easier to do than you might think. One company that works to provide influencers conducted an experiment to see just how hard it would be to fool brands with a fake profile. To do so they created two fake influencers, as seen below:

Look very convincing, don’t they? One of the accounts – calibeachgirl310 – featured a real person. But she wasn’t an influencer, and none of her followers were real. The second account was rather cleverly created using nothing but stock photography.

As they detail in their piece, their fake influencers managed to fool plenty of brands. Very quickly both accounts secured paid deals and were getting inquiries about doing even more when the company did the right thing and closed the accounts down, revealing the reality behind them when they did.

Influencer fraud can be bad for your brand in several ways, with one of the biggest impacts being financial. Fake influencers can seriously deplete your funds and produce no results. One Point North Group analysis found that a very well-known company spent $600,000 on impressions that were either not seen or seen by fake followers for two of their brands.

Proctor and Gamble, however, is a large and established brand. They could recover their losses with no long-term impact. But for smaller businesses and startups that have limited resources, wasting time and money on fake influencer campaigns could represent a major hit that would be hard to recover from.

Influencer fraud may also damage your brand reputation and lose the audience trust that you’ve worked so hard to earn. Fake influencers aren’t known for their credibility. So if it’s discovered you teamed up with one then people may begin to doubt your credibility as well. And by the way, real influencers are not always that well-respected – or respectable – either, as this article details, so even more caution is a must.

So now you know what – or who fake social media influencers are and what kind of damage they can do. But, as you’ve also seen, these fakes can look pretty real. So how do you spot one, especially when dealing with micro-influencers? The simple fact is that it’s hard. There are some red flags that are sometimes easier to spot than others. These include:

As fake accounts – or paid accounts purchased from follower marketplaces – make up a majority of their follower base, fake influencers typically have an unusually low engagement rate considering their massive follower count. The dark side of influencers is that they may be able to buy thousands of fake followers, but those accounts are not going to engage with their content.

That said, knowing their engagement rate alone isn’t enough to assess their authenticity. Make sure you have a clear idea of your industry benchmarks so you know what to compare them against.

While engagement rate can tell you a lot about the authenticity of the social media influencer, it’s not always a foolproof method either. The dark side of influencers is that they do fake engagement by participating in engagement pods. So a lot of fake influencers might still be able to pass the first test.

This means going more hands-on and analyzing the quality of engagement manually. Read the comments to see whether they’re getting tons of irrelevant comments that have nothing to do with the post. You might see lots of emoji-only comments and generic comments that could be used on any post.

For example, there’s a good chance these comments are coming from fake followers or bots.

Real influencers do get these comments too of course. But they also get relevant ones that directly reference the posted content. Like this one from a food influencer. The commenters have actually ‘read’ the post at least. 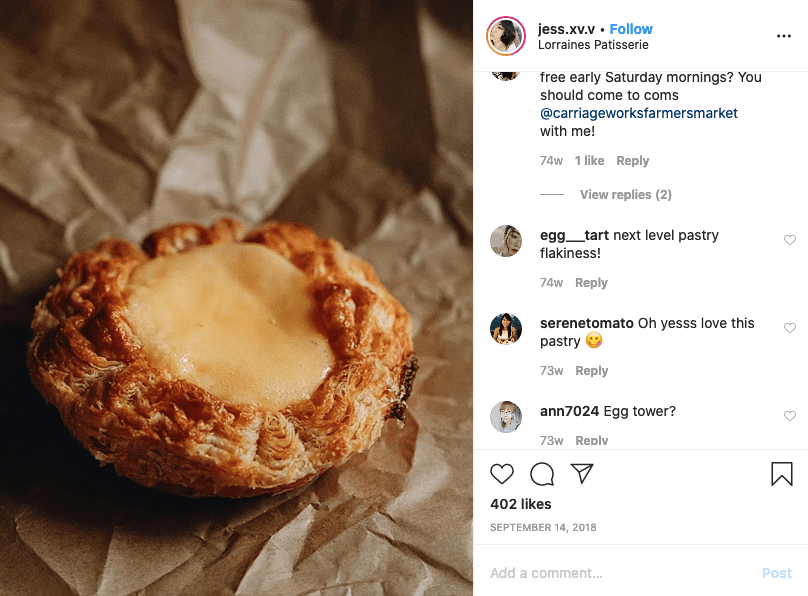 The quality of an influencer’s audience can tell you a lot about the authenticity of their influence. That’s why an audience quality analysis is another important step to spot fake influencers.

For this, you can use a tool like the IG Audit tool, which thoroughly analyzes the follower profiles of a public Instagram account. It can differentiate between bot accounts and real accounts, so it gives you an estimate of how many real followers the influencer has.

But that opens up an issue you’ll face even with ‘real influencers’. Their audience may be real, but are they the ones you want to reach? The IG Audit tool can help a little, but it’s often quite the crapshoot. And then there are the influencers themselves. Are they really people you want to, even indirectly promote your brand?

SHOULD YOU BOTHER WITH INFLUENCERS AT ALL?

It’s hard to find good influencers, that should be obvious to you by now. So should you bother with them at all? The best answer is yes, and no. It’s often a better idea – and one that Pearl Lemon Leads PR team recommends – to concentrate the majority of your public relations and marketing efforts on yourself and your company. On placing yourself as a thought leader and an influencer. On marketing your products on their own merits.

Real influencers, if you can find them, can play a part in that, and our team does reach out to prequalified, genuine influencers from time to time on behalf of a client. But it is never the focus of a PR strategy or any kind of marketing campaign.

Becauseit’s become such a ‘thing’ social media influencers are getting harder to work with, and more and more of them are not quite what they seem. Do you really want to pay a 15-year-old a hundred just because she says she’s an influencer (but actually has fewer followers than your accounts)? That’s a true story, by the way, one of the many told in this rather humorous, but factual article from one of (social media superstar) George Takei’s properties.

How can you make yourself an influencer? Or position yourself as a thought leader that people listen to? Concentrate on yourself. For example, learn about TED talks. They now run hundreds of branded events around the world and are always looking for new voices, not just established ones, to inform and entertain their audiences. You may have just the right message to share without even knowing it.

The same is true of podcasts, news media, and yes, even social media. Save the money you considered spending on social media influencers and invest it in yourself. Work with a PR team like Pearl Lemon Leads. Pearl Lemon Group founder Deepak Shukla was (hate to say it) a rudderless would be entrepreneur living in his mother’s basement just a few years ago. Since then, as he built his businesses, using the same tactics we can implement for you he has:

Been endorsed by Appsumo

He’s now considered a thought leader in his space. And while your space may be very different, you can achieve the same results, but relative to your niche and your business. Without a single influencer involved, unless it really makes sense. Contact us today to find out how.

the dark side of social media influencers faqs

What is the dark side of social media?

There can be a definite dark side of social media influencers, especially for users. For companies, it can allow you to create a great community effect. For users though, it can create a sense of anxiety or isolation because there is the ability to constantly compare yourself to other users.

Can the dark side be used for good?

The dark side can be used for good. Dark posts do allow for some great data collection. Dark posts can be used to target very specific people. This specific targeting can help ads be more effective and in turn help you get more visitors and potential purchases.

What are influencer dark posts?

A dark post is an unpublished social post promoted by an influencer as an ad to a specific audience. It’s a post that cannot be found organically and does not appear on your brand’s timeline. Dark posts can help with split testing and some other data analytics.

Finding niche influencers on Instagram may take a little bit of time and footwork, but it can be well worth it at the end of the day. If you are an established brand, you can see who your top followers are. You can also see your industry or product-specific hashtags and check what are the most popular and what accounts are using them. Cross-referencing hashtags can be a great way to see who is an influencer in your niche.

Why Public Speaking is Nothing to Be Scared Of