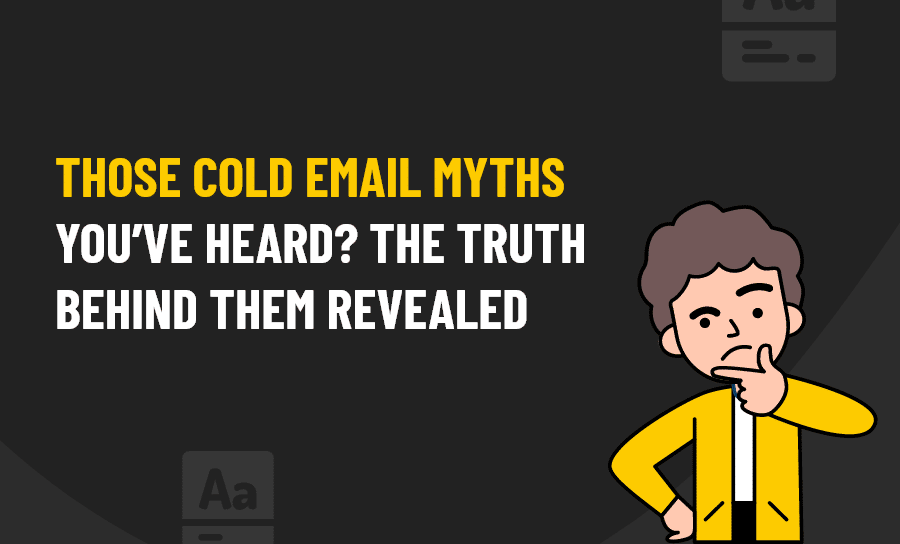 Those Cold Email Myths You’ve Heard? The Truth Behind Them Revealed

Its demise is announced at least a dozen times a week across the various different content outlets; cold email is dead. Cold emailing sucks. Cold email is a waste of your time, don’t do it.

So why do we still offer a cold email service here at Pearl Lemon Leads?

Because none of those pronouncements of death are true. Cold emailing works. It’s always worked and it still works. Cold emailing is one of the most powerful tools you can utilize to gather leads and secure new business for your business. But like everything, there’s a right and wrong way to do things.

Cold email success is a matter, quite simply, of knowing what you’re doing.

Most of the people who claim that cold email is dead are usually those who tried it and found it just did not work for them, so they gave up and started complaining how bad it was instead of trying to learn from their mistakes and improve their strategies and techniques.

Maybe their emails go to spam, in which case it is a matter of fixing the message and bringing up the sender score.

Maybe it is a case of low response rate, in which case you can get a subscriber more interested by introducing a lead magnet.

If those naysayers had taken a closer look at their past efforts with a more critical eye, the chances are good that they would have discovered that they probably made the mistake of believing some of the most common myths that are out there about cold email best practices and that by doing so they damaged their campaign and their chances of cold email success.

There are lots of these cold email campaign killing myths out there, here’s a look at some of the most common:

COLD EMAIL MYTH: USING TRIED AND TESTED TEMPLATES IS THE WAY TO GO

Making use of a standard cold email template is something a lot of people want to do. If you head to Quora, or LinkedIn, or Redditt and search up ‘cold emailing’ you’ll find it’s one of the most frequently asked questions; where can I find the best template for cold emails?

Once in a while making use of one of these copy and paste templates works, but it’s rare. Why? The answer is something of a no-brainer, everyone is using them. Nothing in a template email stands out to engage the reader, so why should they bother to read more than a line or two?

In fact, some cold email templates are so overused that they start to ring a bell for people as soon as they open them (or see the subject line, they may not get as far as opening it.) They feel like they’ve read this before. And they are probably right.

The fact is that there is no harm in looking for successful cold email templates for guidance and inspiration, but you have to find a way to make it yours because it is the personalisation of the messages that increases the reply rate.

COLD EMAIL MYTH: THE SUBJECT LINE IS THE MOST IMPORTANT THING, COPY DOESN’T MATTER AS MUCH

A very common mistake a sales rep can make is that they spend ages trying to come up with the very best subject line they can but then pay far less attention to the copy of the email. They forget that writing an amazing subject line is essential to capture the recipient’s attention, but having great sales emails is a must if you want to hold on to it.

The reason that the cold emails we send at Pearl Lemon Leads work – and the cold email campaigns we create for our clients garner such impressive results – is that they are created by a team of professionals – copywriters whose job it is to create compelling copy – not salesmen doing their best, and often failing, to emulate what they do.

No, actually they really don’t, as long as you keep these very simple ‘rules’ in mind:

Make sure the email offers them something of value
Stay concise and to the point.
Make your cold emails warmer by personalizing them
Be friendly and helpful, not pushy and ‘shouty’
Be genuine. People don’t hate cold emails, but they do hate fakes.

To get the good results you are hoping for from any cold email campaign your message has to be relevant to your audience, even if you don’t know them very well yet. And the best way you can try to ensure that is by segmenting your email lists.

The foundation of a solid marketing strategy is a well-defined target market. Who is your audience? What are they looking for from your company? How many are first-time customers or frequent buyers? Answering questions like these can help you determine everything from where to spend your marketing dollars to how to promote new products or services.

When it comes to email marketing, and especially cold email marketing, list segmentation is the best tool for dividing up your contacts into target markets. By taking this approach, you can put the right message in front of the audience most likely to relate and respond.

How effective is email segmentation? A  MarketingSherpa case study showed that proper list segmentation increased open rates by 20 to 40 percent, with a subsequent rise in click-through rates.

To give some perspective, the average open rate for email campaigns is approximately 21.8 percent, with slight variations across different industries. So yes, it’s an extra step, and involves a different set of tools and skills, but it’s worth the effort.

COLD EMAIL MYTH: YOU SHOULDN’T BE TOO DIRECT WITH THE ASK

Some would be cold email marketers think that if they are too direct with their ask–their CTA–it will put people off and hurt their chances of success. But the fact is that by NOT asking directly you’ll hurt it even more.

If you don’t tell a recipient what you want them to do, they can’t do it. Your call to action is the reason you’re sending an email so, be clear in the ask. You don’t have to be too pushy if that’s not your style, but you do need to be clear.

These are just a few of the most common ways that people sabotage their chances of cold email success. There are many more. But you’re busy, you don’t have time to learn about them right now. Or, to execute a cold email campaign at all, come to think of it.

That’s where an outsourced cold email campaign comes in. But we get it. Handing over the responsibility for capturing those essential to your growth leads and letting someone else write cold email on your behalf is scary. Your reputation is on the line, not to mention the chances of you making a sale.

That’s why at Pearl Lemon Leads the first thing we invite you to do is talk to us. Let us learn about your business while explaining how our cold email services will help you. And they will, so why don’t we get that conversation started right now?