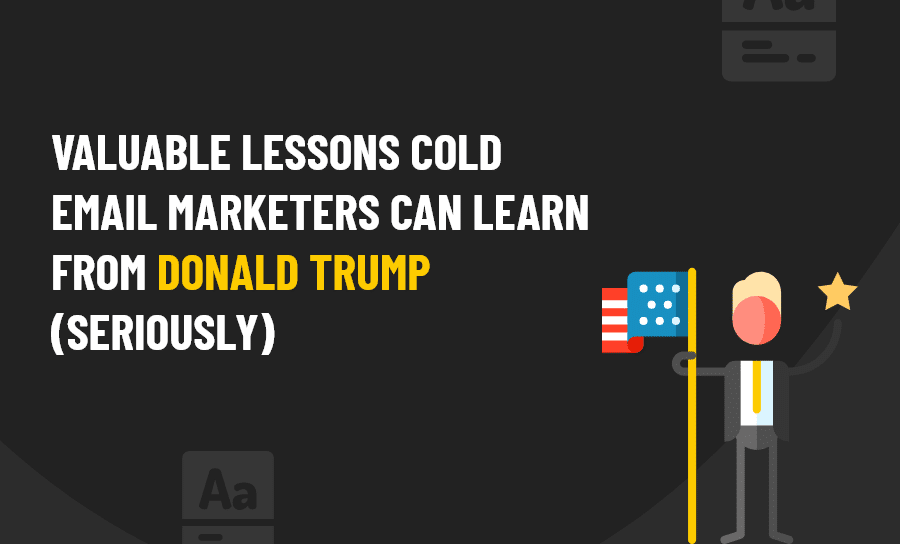 There are lots of advice pieces, webinars, courses etc. put there – I actually offer a good one myself – that will help you use cold email successfully. There are fewer that help guide you away from what not to do. However, when I was reading an article recently about the President of the United States I was struck by just what could be learned from the mistakes he made while running for President a few years ago.

Now we all know that the political campaign itself was successful and that Donald J. Trump was (some say barely) elected as the US’s 45th President. But if he had had to rely on his initial cold email campaigns he would not have stood a chance.

Why? Those campaigns are now notorious. They attracted a ton of media attention (including here in the UK) because they were simply so bad. And possibly illegal in some cases.

The cold email campaign came about at a time when Trump was trailing significantly in the polls. So it seems that he decided to take some time out from worrying about Hilary Clinton’s emails and send out some of his own to solicit monetary donations.

Okay, so what did the Trump camp get wrong?

While more than a few of the people who were sent Trump’s fundraising cold emails were indeed political supporters who had freely shared their email address with the campaign at some point a number of media reports suggested that a large number of cold emails were sent to individuals who never knowingly shared their email addresses with Trump and had no interest in voting for him, let alone sending him a few bucks to help get him to the White House. Quite the opposite, many of the recipients were outraged, upset and offended.

No one is sure – possibly not even Trump himself – whether those email addresses were purchased from email brokers or were left over from an old list that was dusted off and used without considering whether the individuals on it were likely to be interested in this sort of outreach. But either way, sending email outreach to individuals who haven’t agreed to receive it – and will have zero interest in it – is a big misstep.

By sending cold email solicitations to people who hadn’t subscribed to their email list, the Trump campaign was taking a risk—one that didn’t pay off. Only 12% of recipients opened the message, a rate that’s more than 47% lower than the benchmark for these kinds of political emails, suggesting that the cold outreach drove down opens for that email.

Failure To Warm Up The Ip

According to PoliticsUSA, 60% of the messages sent in Donald Trump’s campaign’s first fundraising email ended up in recipient’s spam folders, significantly reducing the reach and effectiveness of it.

And there is a rather obvious reason for this. While previous emails from the Trump campaign had gone out to supporters from email addresses associated with DonaldTrump.com, the fundraising email was instead sent from a new domain, DonaldJTrump.com.

When a large volume of email is sent from a cold email address (that is, one that has not previously sent a similar number of messages), ISPs will often view that outreach skeptically, significantly increasing the odds that your emails will be marked as spam and blocked. And to be honest for the few that did make it to an inbox it may have triggered an alarm with even Trump supporters themselves, as they were perhaps used to seeing the DonaldTrump.com, not this strange new DonaldJTrump.com and for that reason, they quite possibly trashed it unread themselves.

To avoid this fate in your own cold email marketing, it’s important to “warm” the IP address associated with your email sends before sending a heavy volume of messages. There are tools you can purchase/sign up for to do this for you but it is also perfectly possible to do it manually by slowly scaling up the volume of your email sends from the new domain before you start a larger cold email campaign. Send emails to your trusted contacts, friends, coworkers, people who already know you. By demonstrating that your outreach is wanted and valuable, you can improve your email delivery reputation over time and increase the chances that your email will reach everyone you’re looking to engage.

A Lack Of Audience Segmentation

While good email list management would have prevented the Trump campaign from sending messages to individuals who didn’t subscribe, it’s not clear whether it would have been enough to ward off the two FEC complaints that were filed against it. Under U.S. law, political campaigns are not allowed to solicit or accept donations from foreign nationals; however, Trump’s campaign sent emails to a large number of foreign individuals, reportedly including every member of the parliaments of the UK and Iceland.

If the Trump campaign had simply taken the time to segment their email list and sent the fundraising cold emails only to people with U.S. email addresses and individuals whose most recent location was within the U.S., they would have avoided messaging most of the foreign nationals on their list.

With additional segmentation, they could have identified people who were particularly likely to make a donation and personalized those messages to increase the odds that they engaged with their cold outreach. Instead, they triggered formal complaints from multiple campaign watchdog groups and outraged criticism from legislators all over the world.

I have to admit, it was kind of rare for cold email marketing to burst into the mainstream media conscience like this. But while the whole incident was an embarrassment for the Trump campaign, it’s also a great opportunity for marketers like you to learn from ‘ a big businessman’s’ mistakes and avoid repeating them.

By practicing good email marketing etiquette and taking advantage of audience segmentation, you can improve the odds that your outreach reaches the right people—even if it is highly unlikely that you’ll be running for office any time soon!